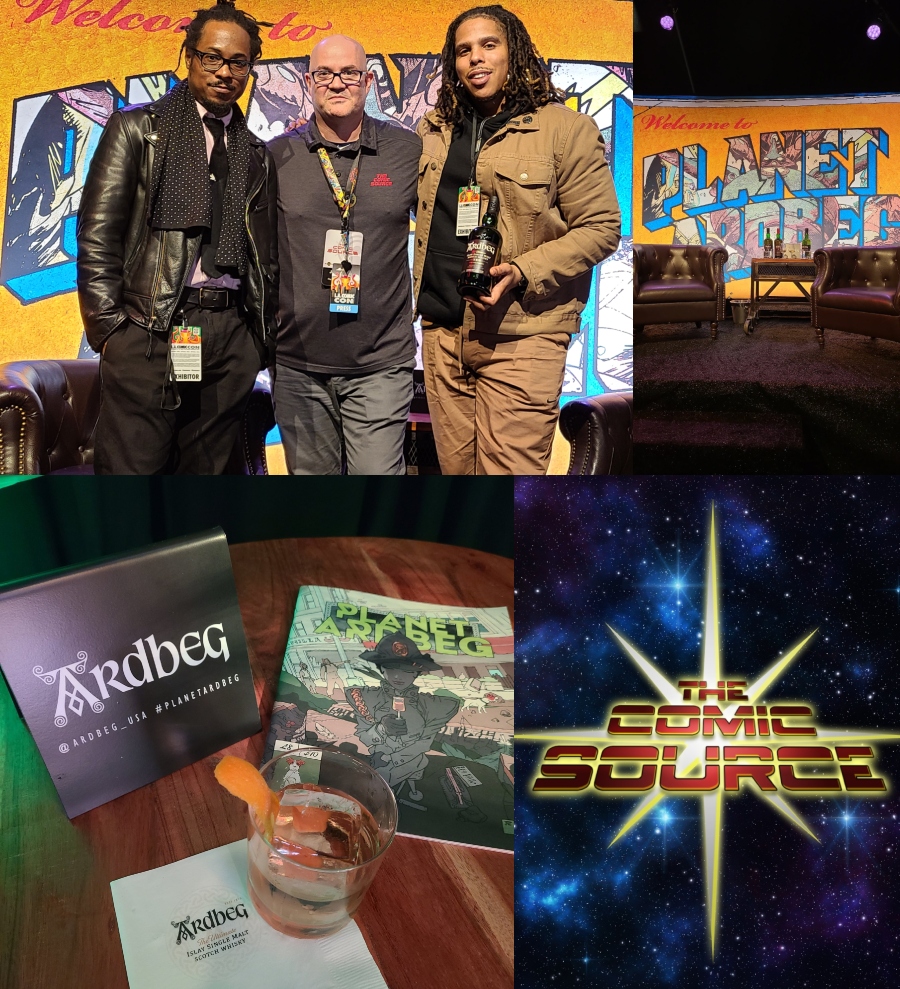 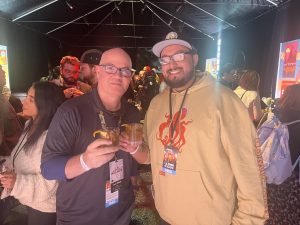 Recording Live at the recent Los Angeles Comic Con, Artist Ronald Wimberly discusses his project with the legendary Scotch Whiskey company, Ardbeg. The intersection of Scotch and comics may not seem like a natural one at first, but as Ronald discusses the project with Ardbeg National Brand Ambassador Cameron George, the overlap between these two distinctive artforms, making comics and making scotch, become apparent. You’ll hear the panel in it’s entirety and then a quick on-on-one with Jace and Ronald highlighting some of the points discussed on the panel. The press release for the event is below.

Planet Ardbeg features three distinct tales inspired by the flavors and origin stories of three Ardbeg expressions – Ardbeg Ten Years Old, Ardbeg An Oa and Ardbeg Wee Beastie. L.A. Comic Con attendees will immerse themselves in the 40-page sci-fi anthology through the tales of “Guardians of Oa,” “The Best Laid Schemes” and “Take it with a Grain of Sand” during a specially crafted and otherworldly drinking experience.

Attendees will be presented with three paths representing the three distinct tales drafted from the unique qualities of three whiskies: 10 YO, An Oa and Wee Beastie. The experience leads guests through a hallway into a series of inlets and rooms where they encounter various environments they interact with based on the graphic novel. The cocktails will be served during a private tasting. Guests will need to reach out to planetardbegrsvp@bhimpact.com in order to gain access to the “invite-only” post-event tasting hours taking place on Saturday and Sunday from 4pm – 6pm PT.

The graphic novel was conceived by cartoonist Ronald Wimberly, Emma Rios and Sanford Greene., each bringing their own distinctive voice and style to the project. Using three expressions in Ardbeg’s Core Range as their creative launchpad, together they produced an anthology of tales as bold and unique as Ardbeg itself, featuring a land of giant botanicals and even bigger beasts. Traversing the triptych of fantastical tales is the Quantum Distiller, who journeys across time and space gathering ingredients and inspiration to concoct the ultimate dram through the three stories influenced by Ardbeg expressions.

Available online via ReserveBar, fans can also experience the three whiskies the novel is based on – Ten Years Old, An Oa and Wee Beastie – at home.

The Planet Ardbeg graphic novel will be available for purchase at the Ardbeg Distillery Visitor Centre, in select comic book shops as well as via Ardbeg.com in certain markets.  A digital version will also be available exclusively for members of the Ardbeg Committee to read (at no cost) at Ardbeg.com/planet-ardbeg.

Fans can stay up-to-date with the latest news by following Ardbeg at @ardbeg_usa on Instagram. For more information, please visit: https://www.ardbeg.com/en-US/planet-ardbeg

Ardbeg prides itself on being The Ultimate Islay Malt Whisky. Established in 1815, Ardbeg is revered by connoisseurs around the world as the peatiest, smokiest and most complex of all the Islay malts.  Despite its smokiness, Ardbeg is renowned for its delicious sweetness, a phenomenon that has affectionately become known as ‘the peaty paradox’. During the 1980s and 1990s, Ardbeg suffered from an uncertain future and it was not until the brand was purchased by The Glenmorangie Company in 1997 that the Distillery was saved from extinction.  Since then, the Distillery has risen like a phoenix and today Ardbeg is well established as a niche, cult malt, with a passionate following.

Ardbeg and The Glenmorangie Company advocate responsible drinking and suggest that drinkers savor Ardbeg whiskies in moderation and in line with recommended daily guidelines for alcohol consumption.