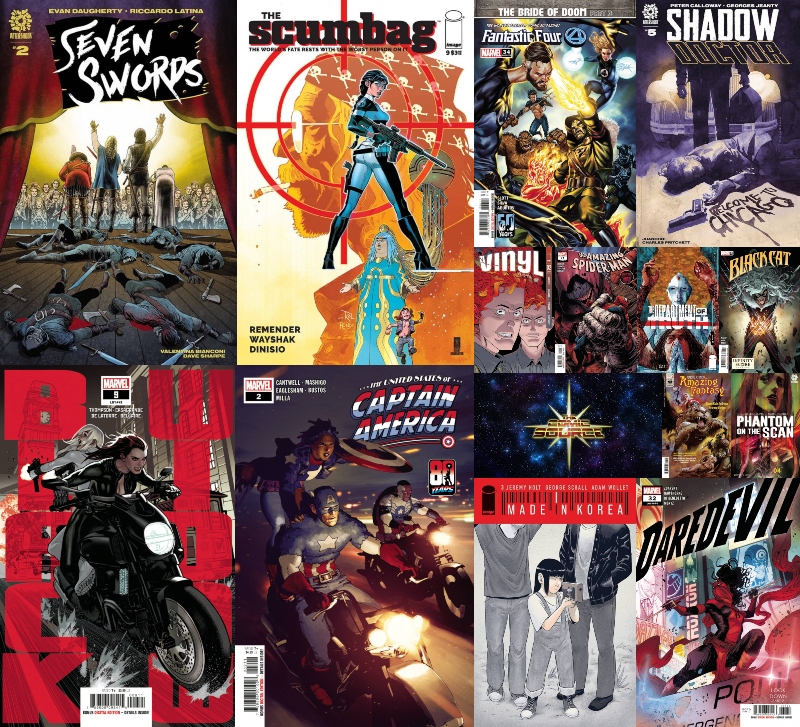 Jace and Jay run down some of the titles they have read for the week of July 28, 2021. All of the reviews are spoiler-free. There are a ton of great books this week and Jace shouts out a few more titles you might want to be on the lookout for.

Amazing Fantasy #1 – A fantastical fantasy world that several Marvel heroes are transported to. We expect they will find each other and team up at some point, but how did they get there in the first place and why?

Amazing Spider-Man #71 – Sinister War kicks off, but we are missing the sinister. No Sinister Six, no Savage Six and no action really. It seems strange as Nick Spencer clearly needs all the space he can get to wrap up his story, but this one feels like a wasted issue. Maybe it’s just poor pacing?

Phantom on the Scan #4 – A horror books that feels more like a suspense novel, we have several people on the run who were experimented on very early on in their lives. Now it seems those lives may be ending because one of the subjects of that experiment has decided to take out the rest. Can the others team up to find the answers in time?

Daredevil #32 – An absolutely action-packed issue of Daredevil as we see Matt starting to show signs of coming out of the funk he has been in that lead him to become incarcerated. Also Elektra is hot on the trail of Bullseye but she may not like what she finds when she to him. What a great last page! Jay’s Book of the Week

Made in Korea #3 – Jesse has quickly bonded with the parents who have adopted her, but the doctor who created her is out to do whatever he can to get Jesse back. Meanwhile, some of the kids at Jesse’s school clearly have nefarious plans and have taken advantage to Jesse’s naivete to use her in those plans.

Department of Truth #11 – The Bigfoot arc comes to a surprising end as Hawke does something that seems out of character. Plenty of emotion in this one as we are faced with the question of whether it only takes one person with an absolute iron clad belief in something to make it real.

Black Cat #8 – Just how does this story tie in with the Infinite Destinies storyline playing out in the Marvel Annuals? Does Black Cat know more about the Infinity Stones that she appears to? Tons of action in this one, but it all sets up more questions than answers

Fantastic Four #34 – The aftermath of Zora’s betrayal has devastating effects for those attending the wedding. Ultimately it may be Johnny Storm who pas the highest price. Once again Doom appears to be pulling the strings from behind the scene and one has to wonder of Doom ever truly planned on getting married.

Black Widow #9 – Black Widow continues to show why it was chosen as Best New Series by the Eisner’s. Kelly Thompson gives us perfectly paced action, interspersed with wonderful banter between Natasha and Yelena. The supporting casts all get sufficient time to show us who they are and the art by is kinetic, slick and gorgeous.