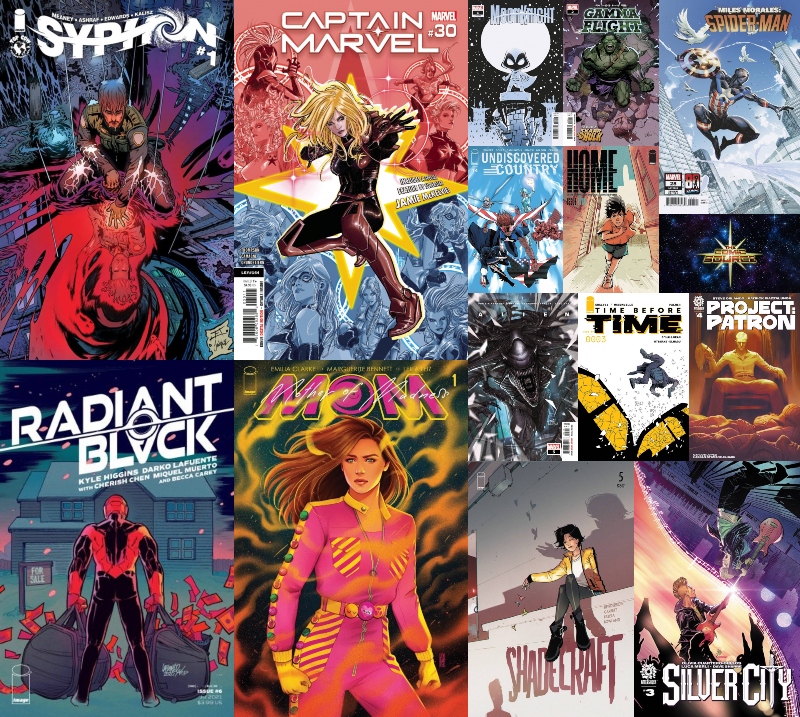 Jace and Jay talk spoiler-free about some of the titles they have read for the week already. The Books of the Week you should really consider checking out are M.O.M. – Mother of Madness #1, Syphon #1 and Shadecraft #5. Plus Jace gives a rundown on some other titles you might want to be on the lookout for.

Time Before Time #3 – In this issue the time-travel aspect of the story starts to take a bit of a backseat to the crime noir feel of the story with the politics of the rivalry between the Union and the Syndicate showing up big time. Tons of action & characterization makes this feel like a big chunk of story that helps to flesh out the events from previous issues. Also the art from Joe Palmer is pitch perfect in combining all the elements of sc-fi, crime noir & action.

Undiscovered Country #14 – As we get to the second book of the third arc of this vast story from two veteran writers, it occurs to us that the end game for this series has yet to be defined. Will it be the expedition successfully finding a cure for the global plague? Will it be the re-opening of the United States to the rest of the world? Is it more meta than that and just enough that Snyder & Soule are starting a conversation about what it means to be American and even more than that, what it means to be a human being on earth. So much to think about always with this thought-provoking series. This issue itself is an exploration of American culture & one of it’s most identifiable creations, the comic book super-hero. All this is illustrated & colored beautifully which the linework and colors jumping off the page.

Alien #5 – Phillip Kennedy Johnson continues at what he does best, world-building. Taking the foundation of what we know about this world form the films, he gives us some great ideas in this issue that really provide tons of potential for more story. Also it gives such great context to the characters that Johnson has introduced us to in the series so far. You add in the action packed Salvador Larocca art that feels kinetic from cover to cover and you have an immensely enjoyable and compelling read.

Gamma Flight #2 – Building on the appearances of Gamma Flight from the pages of The Immortal Hulk this series continues to enrich the world Al Ewing has built with the Immortal Hulk. There likely wasn’t room in the main series with only two issues left to give these characters their due and we love that they are getting their own series to finishing telling their story. Skaar showing up at the end of last issue leads to epic action in this second issue just as you would expect. What you might not expect is how relatable and fun Ewing & co-writer Crystal Frasier make the husband and wife of Titania and Absorbing Man. Also while this feels like a team book and that team only feels like they are getting closer and understanding each other better, the action is fun but it is the character dynamics that make this books good. When you add in the fantastic line work of Lan Medina and the bright Antonio Fabela colors it raising the series up to great.

Captain Marvel #30 – Carol Danvers has reached the end of her magic journey and it doesn’t end quite the way you expect. In fact, Carol may be worse off and have more enemies than ever including the magic wielders of the Marvel Universe. It’s an intriguing and foreboding conclusion to the story from writer Kelly Thompson and expertly illustrated and colored by Jacopo Camagni and Espen Grundetjern. The fallout form the main story leads directly into a bonus back-up story from writer/artist Jamie McKelvie with some wonderful moments between Captain Marvel and Ms. Marvel. One of Marvel best books month in and month out, it’s no surprise that Kelly Thompson has kept the Captain Marvel title going longer than any previous run of the series.

Home #4 – The latest issue of this series that started out feeling like a slice of life drama about family & immigration continues it’s transformation into an action-packed story about a family with super powers. Also the series is an excellent representation of just how important family is in Latin cultures. When you add in the relevant politics you have the makings of a wonderful titles. Also the art is light-hearted and fun which helps the book from feeling heavy handed and balances out the series of the real-life issues being explored.

Moon Knight #1 – This first issue of the new Moon Knight series feels like it is trying to build off the slick style and mysterious take on the hero from the Warren Ellis series a few years ago. Unfortunately the bigger story and scope of what it feels like writer Jed MacKay is building requires more dialogue and exposition and doesn’t lend itself to the quieter tone of the series from Ellis. Also the fine linework from artist Alessandro Cappuccio lacks impact and doesn’t help the emotional beats to land with strength they should. There are some interesting ideas here, so we will have to see if the second issue can build on them.

Miles Morales: Spider-Man #28 – We’ve come to expect great things from the current creative team on Spider-Man, but this issue felt a little off the mark. The classic Clone Saga, while much maligned at the time, still felt important and consequential. This three issue modern equivalent for Miles Morales lacks both of those elements which leaves us feeling, for the first time in the Saladin Ahmed run, like we may have read some stories that don’t really matter. The Carmen Carnero art is still top notch and she conveys the cover to cover action very well. We will have to wait and see if any of the events from this arc have long lasting consequences that may have us re-evaluation this story in the future.

Radiant Black #6 – Once again the creative team for Radiant Black has knocked it out of the park with the latest issue of the series. Throughout the entire series the team has managed to subvert expectations at every turn. In this issue we get the very tragic and emotional origin of Radiant Red which may have many readers who previously disliked her, doing a complete 180 degree turn. When you couple the narrative with the clean yet soft artwork of Dark LaFuente you are left with another perfect issue of this series.

Project Patron #4 – We have almost reached the climax of this incredible AfterShock series. Building on the motivations and interactions between a clandestine team of people who give up their very lives to protect this planet, Steve Orlando has introduced a malevolent villain that has enhanced the stakes immensely. This series truly shows Orlando’s love of the medium as it feel like a modern take on so many classic superhero ideas. Also the art is feels so visceral that it adds to the incredible stakes that have been building throughout the narrative.

Shadecraft #5 –  The end of the first arc feels both like a satisfying ending for the story so far and a set up for so much more to come. Unfortunately the creative team is so busy it may be a little bit before we get more of this story. We can’t wait to have more though, because what started out as such an intimate feeling story really grew into something so much more while still retaining the feeling of how important family and relationships are. The potential for so much more of this world to be explored is here, so we certainly hope the series returns soon. The balance of the wonderful ending while giving us such a great foundation for more story is what made Jay choose this as his Book of the Week.

Silver City #3 – Here we have another title that has grown so much in scope since the first issue. Starting with the premise that the afterlife in many ways may be just as mundane as life on earth, the story has continued to build in layers. From the mysterious workings of the afterlife, it’s queen and the silver knights to the powers Ru may or may not possess, we can’t wait to keep reading and discover the answers. Meanwhile the Luca Merli art has been fantastic through out providing both incredible mood with his colors and fantastic design and emotion with his line work.

Syphon #1 – This new Top Cow series is off to a very strong start as we meet our protagonist who has just gained the ability to take the pain away from others who are suffering, He himself suffers from tremendous guilt he feels over a mistake from his past and thus may be particularly suited to wield these powers, but where do they come from? Also who is the mysterious benefactor who claims to want to educate and help him? Extremely compelling and well-paced with gorgeous art, we are very much looking forward to the next issue. So much so that Jace made this his co-Book of the Week.

M.O.M. – Mother of Madness – We get a huge and immersive chunk of story in this debut issue from an all-female creative team and what a start it is. Original ideas when it comes to powers, fantastic characterization that suits the cynical setting for the story that takes pace in a future society. That society feels like a natural extension of our own and where we are headed in terms of gender issues and social movements. When you add in the story elements where the protagonist breaks the fourth wall or flashes back to events from her past, it only adds to the experience. The artwork is also jam-packed with detail with great linework that often breaks the panels and leaps off the page. This is definitely a must-read and Jace’s co-Book of the Week.