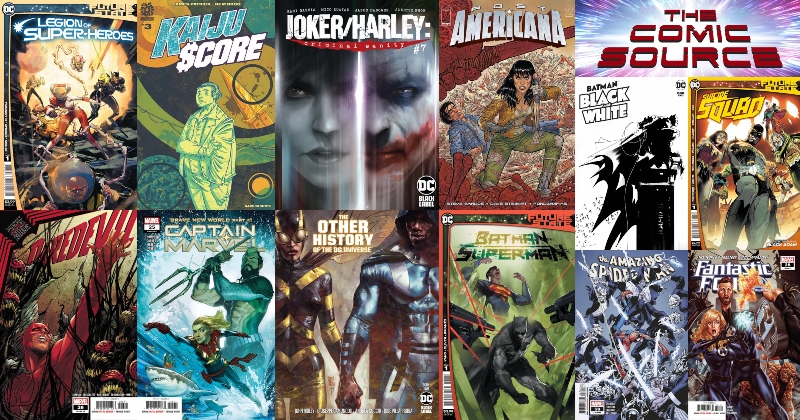 Jay and Jace break down some titles from the week of January 27, 2021 without giving away spoilers. For Jay his favorite book of the week was Batman Black & White #2 which showcased some gorgeous artwork and showed, once again, how the versatility of Batman is as a character allows for so many different types of stories to be told. We also got the next chapter of Captain Marvel’s story in a possible Marvel Universe future that may lead into Carol gaining some the magical powers that have been hinted at by Marvel recently. Over in Post Americana, the blood and guts continue to fly as the action is turned up in this title for mature readers. Both Jay and Jace vastly preferred the Black Adam story in the pages of Suicide Squad much more than the story of Amanda Waller’s latest line-up of Task Force X. Future State Batman Superman gives us some details about the Magistrate coming to power in Gotham and the guys think it should have been the first Future State title to be released. Both Amazing Spider-Man and Fantastic Four take a slight step back in quality this week, but for different reasons, in FF, the latest arc goes out with a whimper instead of a bang although the artwork is top notch. Amazing Spider-Man has once again placed the Kindred story arc on the backburner instead of resolving it and Jace is very frustrated by this. We have a similar problem with Daredevil #26 where the story Chip Zdarsky is telling is unfortunately interrupted by a King in Black tie-in. The AfterShock title Kaiju Score continues to be a wild ride and issue #3 is no exception as our gang of would be thieves are forced to switch things up on the fly. In Joker/Harley: Criminal Sanity #7, we see the first inklings that even this version of Harley may not be able to avoid the machinations of the Joker which could lead her down a very dark path. Finally in The Other History of The DC Universe #2, John Ridley & company pick up right were they left off with book #1 and give us a powerful & emotional look at the DC Universe through the eyes of characters who are often times overlooked. Jace gives it his nod for Book of the Week. Plus we gives a run down on some other titles you may want to be in the lookout for.

The Other History of the DC Universe #2