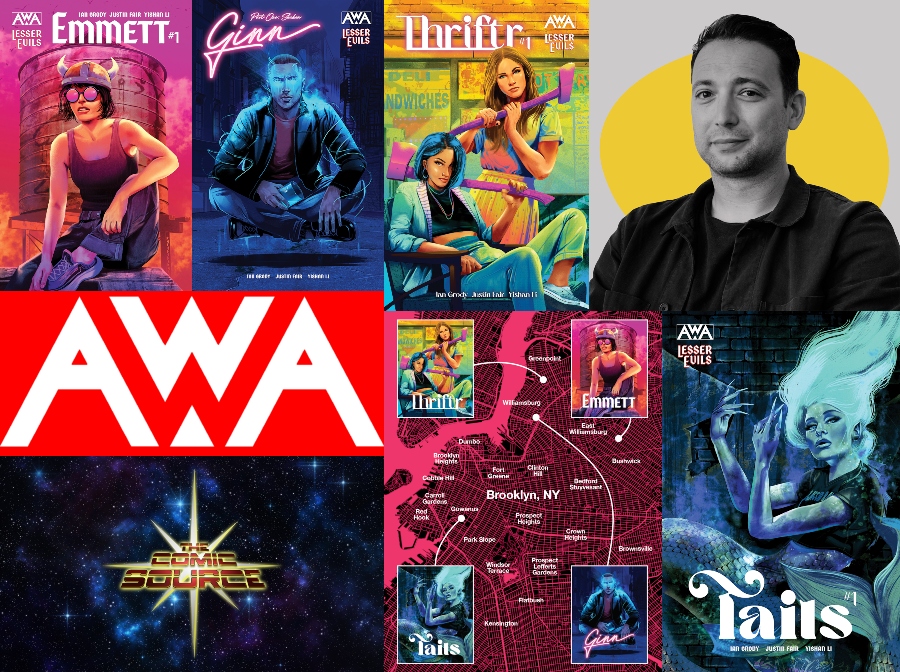 Jace chats with writer Ian Grody about the world of Lesser Evils. A series of stories set in Brooklyn that capture the heart and culture of New York and encompass the reader with a sense you only get from the infinite possibilities of the diverse city.

AWA had this to say about the Lesser Evils universe;

AWA Studios, the independent developer of bold and relevant stories from the world’s most outstanding artists, writers, and artisans, announced today the introduction of Lesser Evils, an all-new original shared universe set in and starring Brooklyn. The universe is kicking off with a slate of series, EMMETT, GINN, THRIFTR and TAILS – stories created by and for people on creative culture’s cutting edge. From comic books to short films and webtoons, the Brooklyn-based adventures debut today with the digital release of EMMETT #1: A LESSER EVILS STORY.

Lesser Evils invites readers to “Brooklyn Through the Looking Glass,” where a golem with benefits, a spiraling genie, a demon who feeds on bad vibes, and a promising young mermaid collide with heartbroken, hard-living, and hype-obsessed humans. Set in the booming and action-packed city of Brooklyn, NY, Lesser Evils is a hilarious, pop culture-filled universe created by Ian Grody (writer) and Justin Fair (director), along with artist Yishan Li (illustrator), that explores what intimacy, spite, selflessness, and friendship mean today.

“My aspiration from the jump has been to create a comic through the lens of contemporary culture. And reflect it back to readers through relevant, relatable stories filled with references to their favorite music, movies, and memes,” said Ian Grody, co-creator and writer of Lesser Evils. “Brooklyn was the perfect backdrop because it’s not only a cultural hub, it’s a place of becoming. Where people actively go to transform and reinvent themselves. Any place where there’s that much hope and desperation and frustration is already full of magic. No better venue for our eerie and eerily familiar tales.”

Justin Fair, co-creator and director/producer of Lesser Evils, added, “As a seminal rocker and voice of a generation, Gavin Rossdale (Bush, Institute), sang: ‘It’s the little things that kill.’ Lesser Evils are the less obvious, often self-inflicted, more insidious evils that threaten our well-being. They are the pitfalls we all must avoid and the obstacles we all must navigate within ourselves to achieve a successful place in our social circles, in our neighborhoods and in the world. Our hope is that through the drama, the humor, and the thrills and chills, Lesser Evils is a guided tour for the reader through some of the lesser-known exotic microcosms of Brooklyn and the frighteningly familiar exotic microcosms of themselves.”

“It’s kind of slightly chilling, slightly funny, but more of a mystery, everyday life kind of thing,” said Yishan Li, artist of Lesser Evils. “That’s definitely something I like to draw.”