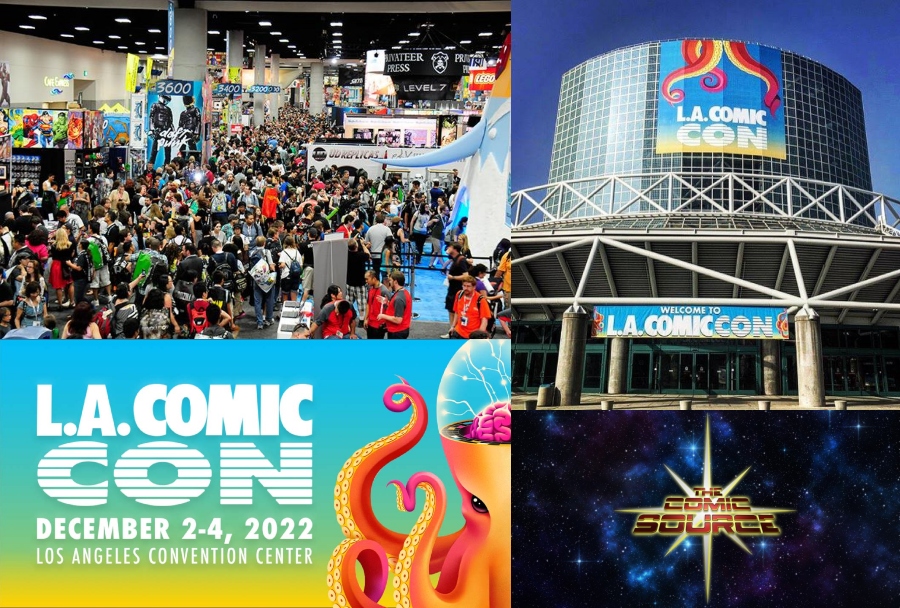 Visit the LACC for tickets and more details

Jace chats about what to expect at the upcoming Los Angeles Comic Con. It will be the biggest show ever with a huge guest list and tons of comic, toy and anime vendors. Plus a huge cosplay presence. See the official announcement below.

2022 Event Now Taking Up More than 1.2 Million Square Feet Of the Los Angeles Convention Center, Welcoming the Most Diverse Lineup of Activations and Celebrities, Tapping into More Facets of the Entertainment Industry Such as Gaming, Anime, and Others – With all the fun of the Pop Culture, Sci-Fi, Comics and Other Fandoms Loyal Fans Have Known and Loved!

WHAT: L.A. Comic Con, Los Angeles’ largest event for comics, gaming, sci-fi, and pop culture, is back and better than ever! Last year, after returning in full force and in-person for the first time since the onset of the pandemic, L.A. Comic Con’s 2021 show was deemed one of the best cons of the year. Nearly 95,000 fans, creators, artists, cosplayers, celebrities, and vendors attended the event and participated in celebrity panels, autograph signings, activations, comics, cosplay, and pop culture fanfare. This year, the event expects to host 800+ diverse artists and vendors selling comics, collectibles, art, toys, apparel, and everything in between. Attendees will be granted up- close-and-personal access to some of the biggest names in entertainment, with a handpicked selection of panels, events, exhibits, and celebrity meet-and-greet opportunities. Special celebrity guests include Simu Liu [Shang-Chi and the Legend of the Ten Rings, Kim’s Convenience], Elijah Wood [Lord of the Rings, Happy Feet], Giancarlo Esposito [The Mandalorian, Breaking Bad, Better Call Saul], Charlie Hunnam [Sons of Anarchy, King Arthur: Legend of the Sword], William Shatner [Star Trek: The Original Series, Miss Congeniality], Ming-Na Wen [The Mandalorian, Marvel’s AGENTS OF S.H.I.E.L.D], Amy Jo Johnson [Mighty Morphin Power Rangers, Felicity, Flashpoint], Steve Burns [Blue’s Clues & You, Young Sheldon], the cast of The Boys, The Umbrella Academy panel and many others among others.

WHY: Loyal fans continue to ask us to keep doing more new and interesting things and we’re answering that call! Los Angeles is the entertainment capital of the world and home to some of the most high- profile entertainers, artists, creators, and film/television studios. Los Angeles is the ultimate “mash up” of all things Pop Culture, so L.A. Comic Con must evolve and grow to reflect that.  L.A. has the best, most diverse and most knowledgeable fans in the world – and our job is to keep listening, keep improving, and give them the show that L.A. deserves.  By fans, for the fans – only in L.A.

L.A. Comic Con is taking over the West Hall of the Los Angeles Convention Center where Subnation will produce an expansive and exciting gaming, esports and anime experience.

Your ticket to L.A. Comic Con will now get you access to the West Hall to experience 3 main zones throughout the 147,000 square-foot venue – the Gaming Stage, the Stream Studio, and the Gaming Freeplay Area – Bringing you panel presentations, cosplay meetups, talent meet & greets, live game demos, a collegiate League of Legends esports tournament and much, much more!

Cosplayers will be able to compete for $30,000 in cash and other prizes in the 7th Annual Cosplay National Championship by participating in one of three categories: Master, Journeyman, or Novice. All genres are welcome, including characters from film, television, theater, comics, video games, sci-fi, anime, horror, and original creations.

It’s rare you find 80s and 90s children who have never seen Jimmy Neutron. Jimmy’s determined nature made him an interesting character to teens and children alike. The cast of Jimmy Neutron, including  Candi Milo, Carolyn Lawrence, Debi Derryberry, Jeff Garcia, Mark DeCarlo, and Megan Cavanagh will be on the main stage doing a live script-reading to celebrate the show’s 20th anniversary!

Lord of The Rings

Sean Astin and Elijah Wood take the Main Stage on Saturday, December 3rd to discuss what happened behind the scenes to make Peter Jackson’s blockbuster Lord of the Rings film trilogy come to life.

Your favorite group of vigilantes from The Boys, Karen Fukuhara (Kimiko), Laz Alonso (Mother’s Milk), and Tomer Capone (Frenchie) will be appearing Saturday and Sunday of Los Angeles Comic Con for autographs, photo ops and a Main Stage panel!

The Mandalorian took Disney+ by storm and has become tremendously popular during its first two seasons. This Star Wars story, set in the years after the fall of the Galactic Empire, tells the tale of a member of the race of bounty hunters that spawned Boba Fett. Ming-Na Wen (Fennec Shand) and Giancarlo Esposito (Moff Gideon) will regale convention goers with tales from one of the most innovative production sets ever built.

Cast members from the classic 1993 baseball film, The Sandlot, will take the main stage on Sunday, December 4th! The group plans to get nostalgic as we take a look at the last 30 years of the classic film.

The Umbrella Academy is coming to Los Angeles Comic Con on Saturday, December 3rd! Show creator Steve Blackman will be joined by co-executive producers Jason Neese & Jamie Neese as well as some special guests on our Main Stage for an epic conversation about the award winning Netflix Show.

The presenting sponsor of the Main Stage, Tiltify is a fundraising platform for the digital generation that provides live, interactive technology to engage and inspire communities of people to donate or fundraise for important causes the world over. This year we’re partnering with Tiltify to help raise money and awareness for World Central Kitchen, a nonprofit organization that is first to the frontlines providing fresh meals in response to crises. Start fundraising today to compete for $30K in cash prizes. Anyone around the globe can participate digitally to raise funds for World Central Kitchen.

Presenting sponsor of the mobile app and a new award in the National Cosplay Competition, “Best Headgear.”

Exhibiting for the first time at L.A. Comic Con, with an all new set of digital collectibles and free to play online game.

Tickets for L.A. Comic Con’s 2022 event are currently available for purchase via this link. Stay tuned and stay in the know by visiting www.comicconla.com and following the event updates on Twitter, Facebook, or Instagram.