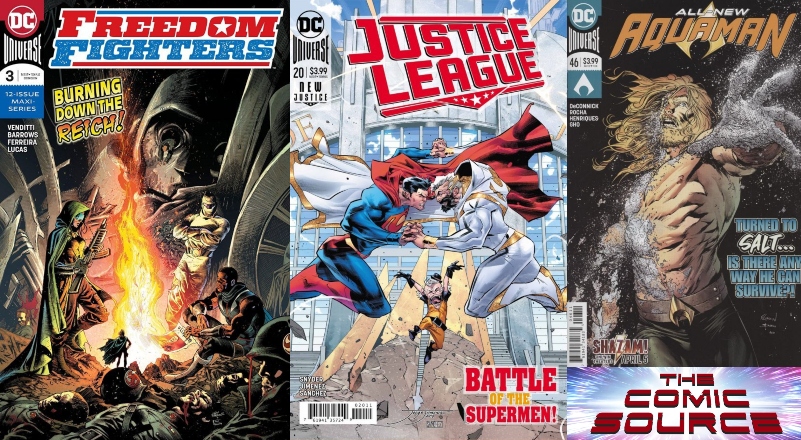 Jace breaks down three DC Comics titles. We explore the world of present day in which the Nazis won World War II. For years after the war the heroes of the Freedom Fighters were hunted and eventually killed, but now a new generation of heroes has emerged. They are taken up the name and fight of their fallen forebears and giving their all to bring about the return of Uncle Sam and achieve a final victory over the Third Reich. In the pages of Justice League #20 we get a look at a Utopian world, the world that Superman entered the sixth dimension to find, one where the Justice League found a way to defeat Perpetua and prevent the perversion of the universe she has been planning, but just as everything seems to be idyllic, we see some cracks start to show. What do Martian Manhunter and Hawkgirl learn from their supposed future child? What does it say that Bruce Wayne is the one hero no longer present in the future timeline? And most importantly, just who is the future Superman and why has he trapped the original in a void without sunlight? Finally in Aquaman #45 Kelly Sue DeConnick continues to build upon the grand mythos she has created for the world Aquaman finds himself in following his apparent death. We learn that Callie’s mother is far more than she seems and everything from Callie’s being left behind to the poisoning of the waters surround the Village of Unknown Water has been part of a scheme by Namma to eventually bring about the destruction of the world. Luckily as the issue ends it appears Arthur may have more allies than he realized and they will be coming from an unlikely group.