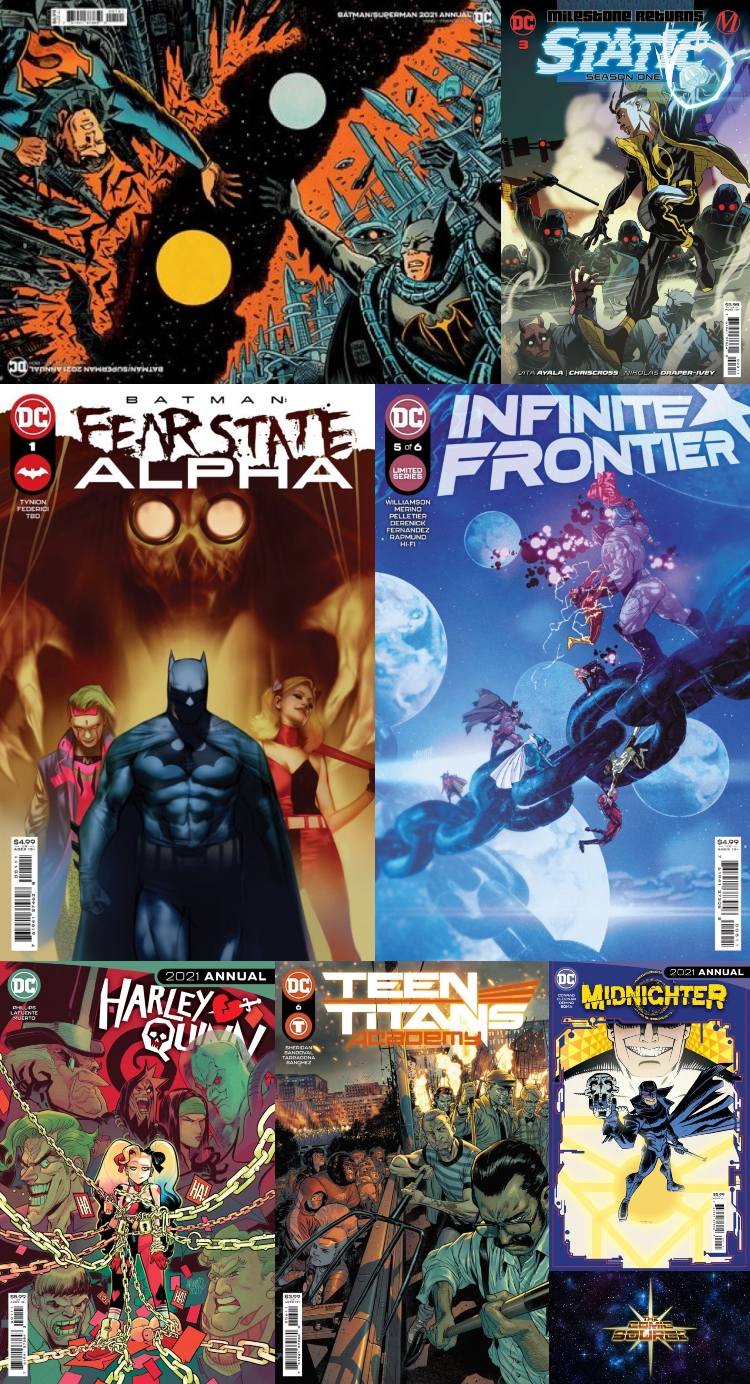 Jace and Rocky from Comic Boom are back with another week of DC Comics. It’s the fifth Tuesday of the month and that means … tons of Annuals! We also get Batman: Fear State Alpha #1 and Infinite Frontier #5. Plus don’t forget to check out the celebration of Aquaman’s 80th anniversary in today’s other episode.

Batman Superman Annual 2021 #1 –  We get to experience more tales from the universe of The Archive of Worlds as this version of Batman & Robin and Superman switch worlds to deal with the respective foes they are facing. The Silver Age fun feel of the recent arc continues here!

Static Season One #3 – As Virgil Hawkins begins to learn more about the powers he has, he also realizes he will need the help of his family and friends, just as he allows has, if he is going to rise up to the challenges he faces. Also Hotstreak makes deal & shows just how despicable he truly is.

Batman: Fear State Alpha #1 –  Fear state kicks off in this excellent issues as the creative team fires on all cylinders to start all the different plot threads and elements of this event in a very intriguing way. Rather than feeling derivative or repetitive with respect to this event following so closely after the end of Joker War we get several in story reasons why this event MUST happen right now. Plus Tynion’s desire to level up the menace of Scarecrow works to perfection as we see what Jonathan Crane desires more than anything … the acknowledgement of his self-proclaimed genius.

Infinite Frontier #5 – We learn what Darkseid has planned for the multiverse and how it’s going to be carries out. Plus an all out battle between Justice Incarnate and the team Darkseid put together that he is calling, what else but … Injustice Incarante.

Harley Quinn Annual 2021 #1 – We should really call this the Kevin Annual, because this issue is all Kevin, all the time. Harley’s current sidekick gets to show his agency and skills as Harley is taken prisoner by Keepsake. Will Kevin have what it takes to rescue her? If so how will he do it? Also we learn all there is to know about Keepsake, his connection to Harley’s past and why the heck he calls himself Keepsake in the first place.

Teen Titans Academy #6 – Some of the academy students attempt to go on a little weekend getaway but end up in the middle of a classic DC supervillain’s plan to take over a small town. We aren’t going to tell you who it is, but let’s just say Gregg may end up on the wrong side of this fight.

Midnighter Annual 2021 #1 – We reach the end of the Midnighter time travel saga that kicked off in the possible future of the DC Universe in the pages of Future State. It isn’t all quite as it seems though because despite Midnighter’s best effort and him breaking out of the paradox he was in, Andrev Trojan is still around. The fact that Midnighter doesn’t know this may be what leads into Future State for him all over again.