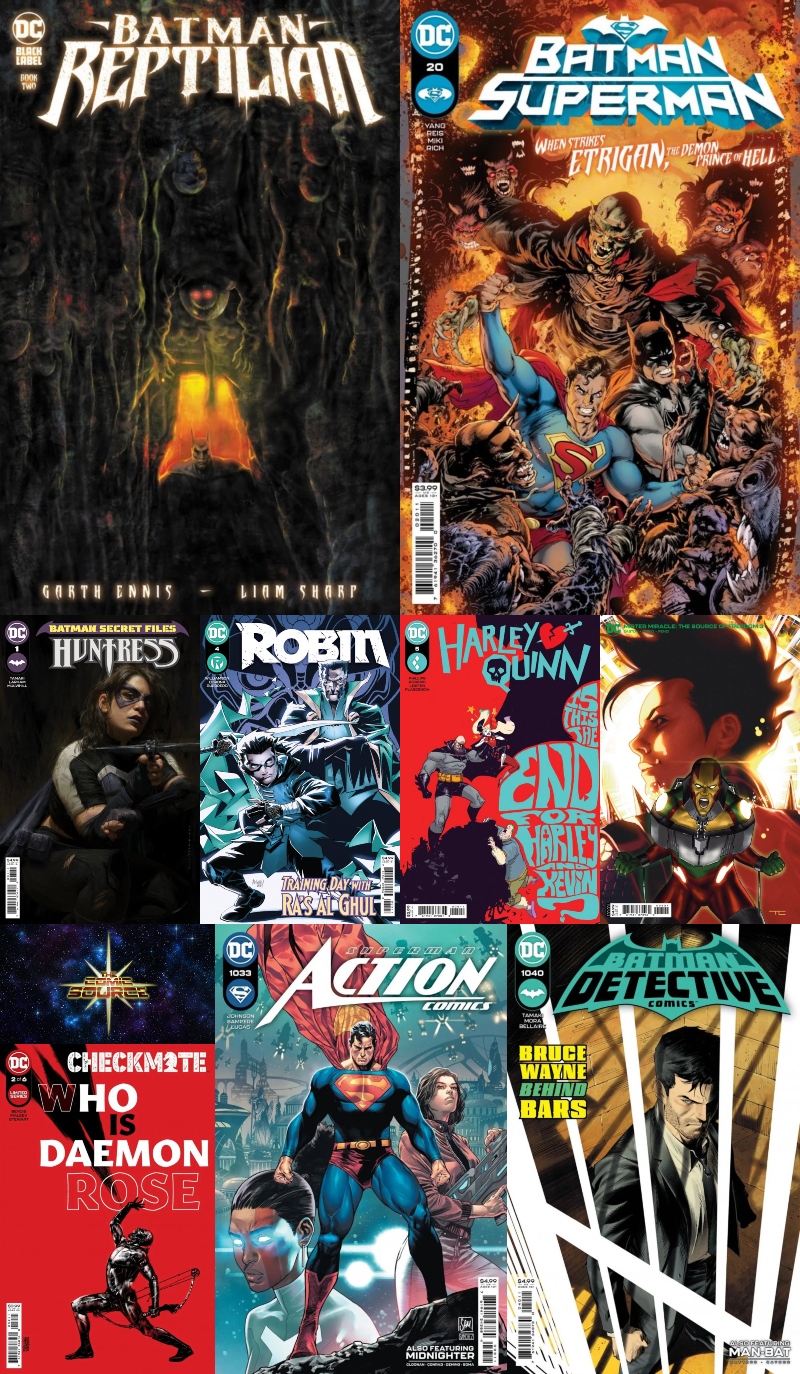 Jace and Rocky from Comic Boom! talk about 9 of the 18 titles DC is putting out for the week of July 27, 2021. That’s right 18 titles! So many books they had to break this week up into two episodes.

Action Comics #1033 – Superman gets more political than we have seen him in a long time as he tries to stop Atlantis and the surface world from going to war. Also there may be much more to Thao-la that meets the eye. Could she actually be working for Mongul?

Batman Secret Files: Huntress #1 – Helena survived the infection of parasites by Hue Vile, but has the sickness changed her forever? If so, can she use these new found abilities to turn the tables in Vile. Even if she does it may not be in time to save the hero we learn is infected in the cliffhanger ending.

Detective Comics #1040 – Bruce Wayne turns himself into Gotham PD to clear his name While he is sitting behind bars he encounters someone in jail along with him who may, or may not know his secret identity. Meanwhile, the Penguin is definitely returning to his criminally malevolent roots as he attempts to once again prove to be a bigger threat to Batman than just a crooked casino owner. In the backup story we get an incredibly impactful Man-Bat story that feels very consequential.

Checkmate #2 – As we jump around various times of the recent past, we try to piece together just what Leviathan’s end game is. At the same time Lois Lane continues to search for clues to understand the cryptic message her father told her before he died.

Batman Superman #20 – Auter.io continues his quest to create a perfect world and for him that means destroying the versions of Superman, Batman and Robin that are currently trying to thwart him. When all else falls, he chooses to splice the hellish world of the Demon with Superman’s World of Tomorrow to allow the Demon Horde of the Apocalypse to tear Superman’s world apart. Can the Man of Steel and his allies stop the horde in time?

Harley Quinn #5 –  Harley manages to successfully infiltrate Hugo Strange’s HQ to rescue her new sidekick Kevin, but it takes some bathroom hijinks for her plan to take off. Ultimately she may be successful, but has she actually just played into the plan Strange was hoping for all along?

Batman Reptilian #2 – Batman is on the trail of the mysterious monster that is wreaking havoc on the Gotham underworld. He doesn’t seem to concerned with the injuries that the criminals are suffering though. This is clearly a Bruce Wayne with a harder edge than we have seen before as he wonders what the monster may have in common with a great white shark.

Mister Miracle: The Source of Freedom #3 – Shilo Norman just starts to use his newfound powers and gain an understanding of what N’ver Free wants and where she comes from when disaster strikes. Norman is left broken and hurting, can his agent Vito with the help of Oberon get Shilo back in the fight?

Robin #4 –  Damian spends some quality time with his grandfather, but are there lessons he can actually learn and talk to heart from Ra’s Al Ghul? Meanwhile back on Lazarus island with the death of Ravager the Lazarus tournament is officially ready to get underway.