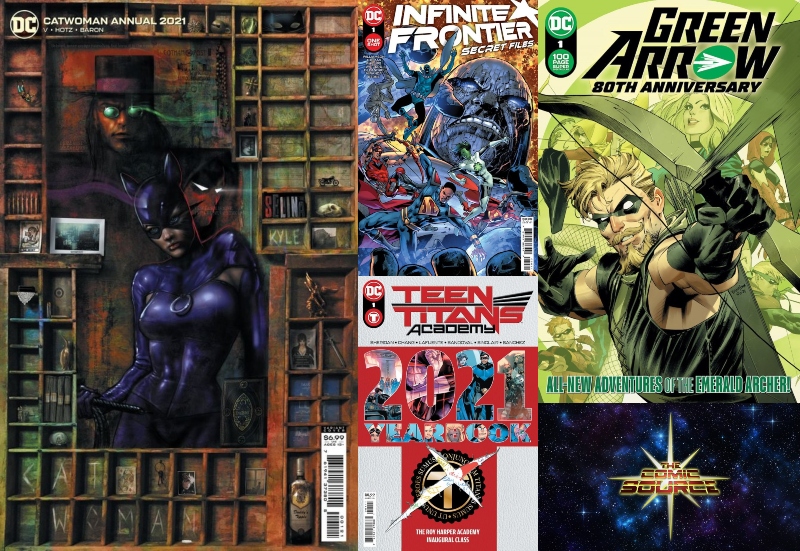 Jace and Rocky from Comic Boom! discuss the DC books for the week of June 29, 2021. It’s a fifth Wednesday this month and as is often the case, DC is taking advantage of the extra Wednesday to release some Annuals. We also get a print version of the Digital First Infinite Frontier: Secret Files and we celebrate 80 years of Green Arrow. The Catwoman Annual is wonderfully written and gives us our first background on Father Valley. It turns out he has ties to Azrael and how that might play out is very intriguing. Also the art in the book is top notch. Over in the Teen Titans Academy Annual we get some of the long desired character work for some of the students of the academy but still plenty of Red X also. The Infinite Frontier Secret Files isn’t mandatory reading to understand what is going on in the Infinite Frontier mini-series, but it certainly does give more context and we do recommend picking it up. Finally the Green Arrow 80th Anniversary special does an incredible job of encapsulating so many of the most iconic eras of the Emerald Archer. Both with the narratives and the art, we find ourselves at times transported back to certain periods of the Green Arrow comics and we love that so many of the creators from those books join us here. Plus there is an incredible tribute to Denny O’Neil who certainly was a very important creator when it comes to defining Oliver Queen.