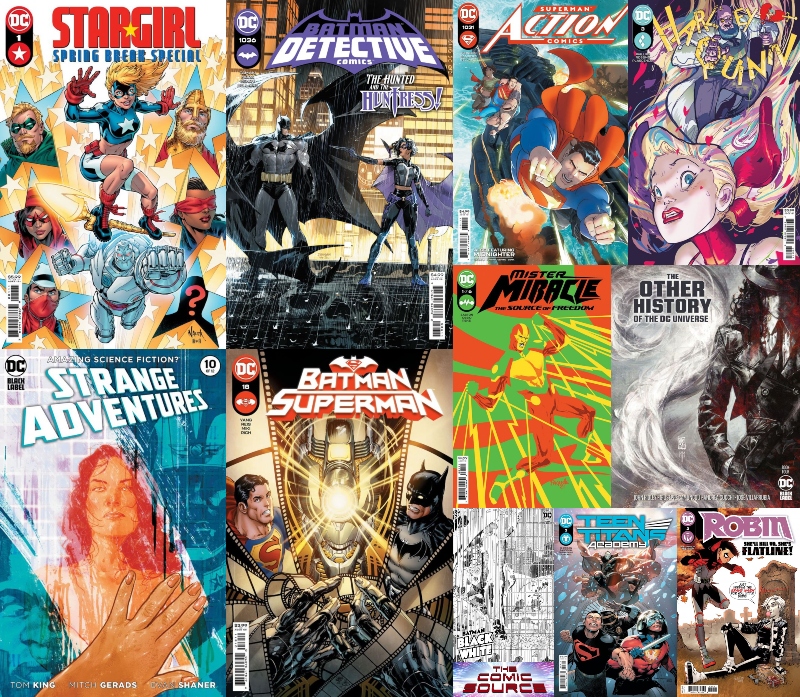 Jace and Rocky from Comic Boom! talk about the DC offerings for the week of May 25, 2021. Detective Comics #1036 continues to focus on Bruce Wayne and Batman as they acclimate to their new neighborhood while trying to solve the mystery of the recent string of murders in Gotham. Strange Adventures #10 purports to contain big revelations, but we aren’t so convinced what Tom King is telling us is true. Jace has his own theory about what’s really going on. Batman Superman #18 feels like the story should be starting to wind down for Rocky, but Jace thinks based on the most recent information we get in this issue, we are still in for at least 3 more issues. Both guys feel like Action Comics #1031 is a step in the right direction in terms of narrative and the art is spectacular. Harley Quinn still has Rocky’s attention, but Jace is ready to jump ship as the story continues to march towards the Gotham we saw in Future State. Mister Miracle #1 was a pleasant surprise for both Jace and Rocky, based on the Shilo Norman story we got in Future State are expectations were very low. The creative surprised us with solid art and very intriguing characterization, maybe the first true character development we have ever seen for Shilo Norman. The guys are in for at least one more issue for sure. The Other History of the DC Universe #4 is a wonderful character study of Renee Montoya, although Jace points out that it doesn’t add as much new context as previous issues may have done for their characters. Batman Black & White certainly has a very Batman feel but Rocky finds this short stories for Batman just don’t bring enough to the table and Jace wonders if it is time to retire this concept for a good long while. Teen Titans #3 is chaotic and Rocky loves it, but Jace is ready for more Titans in their own book and much, much less Suicide Squad. Robin #2 is a wild and fun ride for Rocky, but Jace laments some lazy storytelling and reversal in character development for Damian. The Stargirl Spring Break Special is nearly a perfect comic, both guys chose it as their favorite DC book of the week and it accomplishes this by being action-packed, brightly colored, full of hope with gorgeous art. All we can say is this creative team really understands the true heart of the DCU.