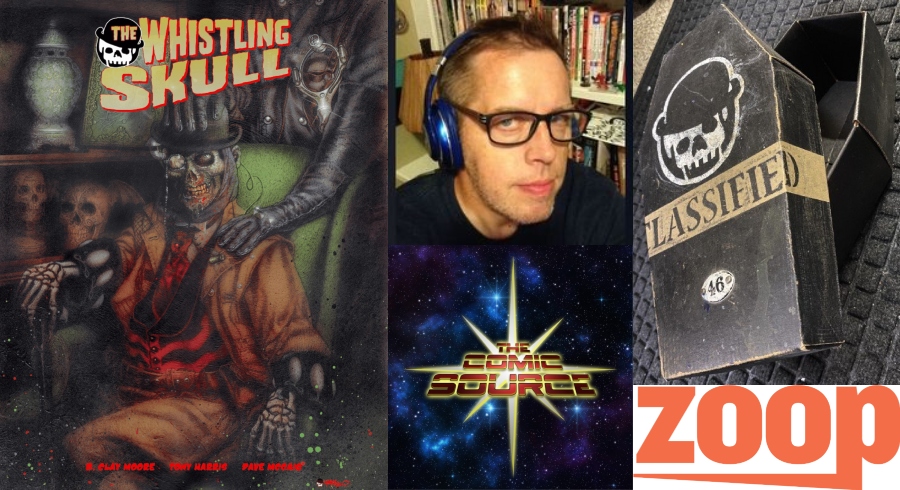 Go PLEDGE and become part of the Whistling Skull campaign

Jace chats with writer B. Clay Moore and the Zoop campaign for Whistling Skull. This is a property B. Clay co-created alongside Tony Moore and it was at one time tied into the DC Universe and the classic Justice Society team. Re-Mastered for a whole new edition showcasing Tony’s amazing art, this is your chance to get the complete story … so far. Could this talented creators return to this rich world, with it’s intriguing plot and pulp adventure feel? Listen in and hear what B. Clay’s thoughts are on that very thing!

In a remote village in Switzerland, the townsfolk face a terrible threat. People keep disappearing without warning or explanation, and the authorities are powerless to help. But the secret organization known as the Skeleton is aware that something sinister is going on, and they’ve dispatched their top agents to investigate: the eerie crimefighter known as the Whistling Skull!
With his assistant Knuckles at his side, the Skull can draw on the benefits of decades of crimefighting to uncover what’s happening in the village. But this is not the same hero who went on all of those adventures. The last Whistling Skull disappeared after fighting side-by-side with the heroes of his generation, and though his predecessor has the memories and skills of every man who has come before him…he’s never been on a mission before.
Can the new Whistling Skull prevail when faced with pure evil? Or will the horrors that were inflicted on the village soon spread to the entire world?

From an Entertainment Weekly review:

The Whistling Skull is at once a throwback to pulp fiction of the 1930s and 1940s (think Doc Savage and Sax Rohmer’s Fu Manchu novels) and a witty, grim and poignant tale.
The Whistling Skull and his sidekick, Knuckles, are actually William Massey and Nigel Singleton, Brit boyhood friends who’ve grown up to fight Nazis and other criminals in 1940s Europe. Tony Harris, who has done such marvelous artwork on books including DC’s Starman, is superb (along with colorist Dave McCaig) at conjuring up foggy menace, using dark greens, grays, and sallow yellows as his primary colors to (barely) illuminate figures drawn with lantern jaws and thick bristly eyebrows of determination.
B. Clay Moore’s script has The Whistling Skull roaming Europe driving a gigantic Art Deco auto dubbed The Battlewagon. Skull and Knuckles out of costume are like creations born of a cross between Arthur Conan Doyle and P.G. Wodehouse. The mysteries are well thought-out; the humor is boisterous; the crime-fighting is bone-crunching.

***These characters were originally brought into the DC Comics universe through the JSA Liberty Files: The Whistling Skull series, but the story has been tweaked for this Zoop campaign by Moore and Harris, re-establishing the world of the Whistling Skull (and Knuckles) as originally intended.