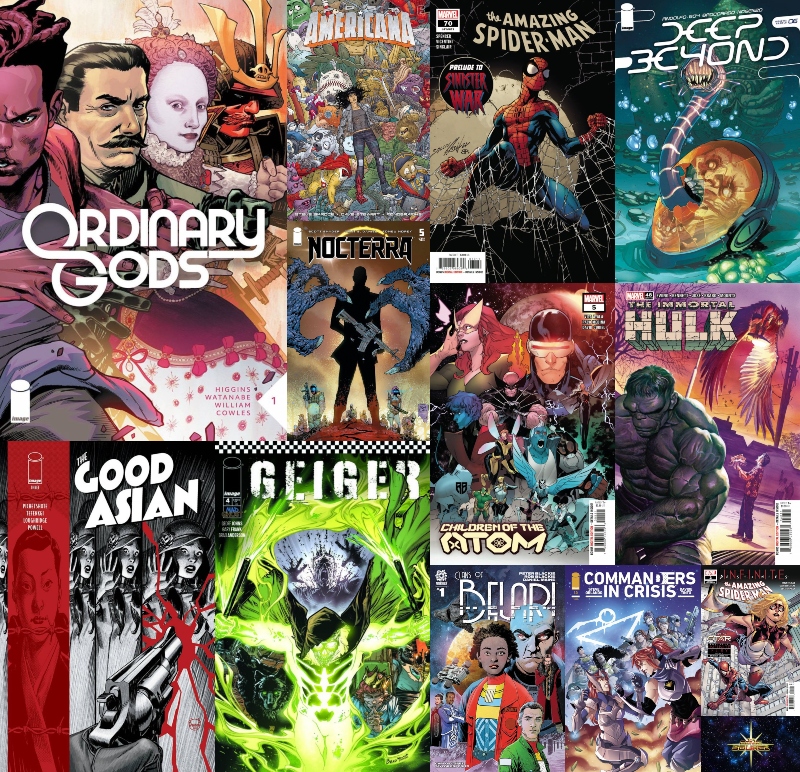 Jace and Jay talk about some of the books they have read already for the week of July 7, 2021. Post Americana #6 is cover to cover action and it feels like the end is near and the winner may be the last man standing! Amazing Spider-Man #70 is also very fast-paced but unfortunately it also feels a bit choppy. We can’t help but wonder if the impending departure of Nick Spencer means he is having to accelerate his plans to try and finish off as many plot threads as possible and that may lead to a decline in quality. Deep Beyond is a book that continues to impress and we hope everyone is giving it a chance because it is epic Sci-Fi that keeps growing in scope & hasn’t disappointed yet! Nocterra is another Image title that continually delivers. The best artwork of Tony Daniel’s career along with amazing color work from Tomeu Morey brings the world Scott Snyder & Daniel have created to life in such a way that you can’t help but care about these characters. Masterful job on all fronts. Children of the Atom #5 has a big reveal that really surprised us. What is not surprising is the authentic voices Vita Ayala is giving to these teenagers, fantastic and authentic, plus great art. Immortal Hulk only has 2 more issues after this week’s #48 and we see some hints of where it might be headed. We just hope we get a full and satisfying conclusion rather than an ending that leaves lingering questions or doubts. The Good Asian #3 continues to be a perfect period piece with wonderful art and moody characters that inhabit a world that accurately reflects the pulp noir feel of Chinatown in the San Francisco of the 1920’s. The fact that the plight of the Asian characters in the story is still relevant today is both poignant and revelatory. Clans of the Belari is a promising start for two first time comic writers from AfterShock. Set in a Sci-Fi world where clan designation and loyalty to that clan means everything, will we see the human spirit triumph? Commanders in Crisis #10 shows the heroism of the team in the face of incredible odds. They rise to the challenge just as you would expect them too. This title continues to be a love letter to comics and the giant summer events of our childhoods, so much fun! Amazing Spider-Man Annual #2 is the next chapter in the Infinite Destinies story and we get Spider-Man trying to connect with Star to stop her zany but somewhat homicidal mission to get revenge on those that mistreated her in high school. Spider-Man may be the perfect person to relate to Star, but she is probably incapable of listening. Jay’s Book of the Week, Geiger #4, is as fast-paced as ever. Geoff Johns & Gary Frank seem determined to go at a breakneck pace to never let us catch our breaths as the action is coming fast & furious. Much like the character of Geiger himself, keep moving to keep the emotions at bay, but their masterful storytelling has the characterization coming through in the little moments as well as the action scenes. Jace’s Book of the Week, Ordinary Gods #1, is a huge story of immortal ‘gods’ unknowingly trapped on earth. Kyle Higgins & artist Felipe Watanabe give us a perfect first issue here, expertly balancing the past with the present and allowing us time to connect with the protagonist while still giving plenty of historical context. Jace also gives a rundown on some other titles you may want to pick up this week.