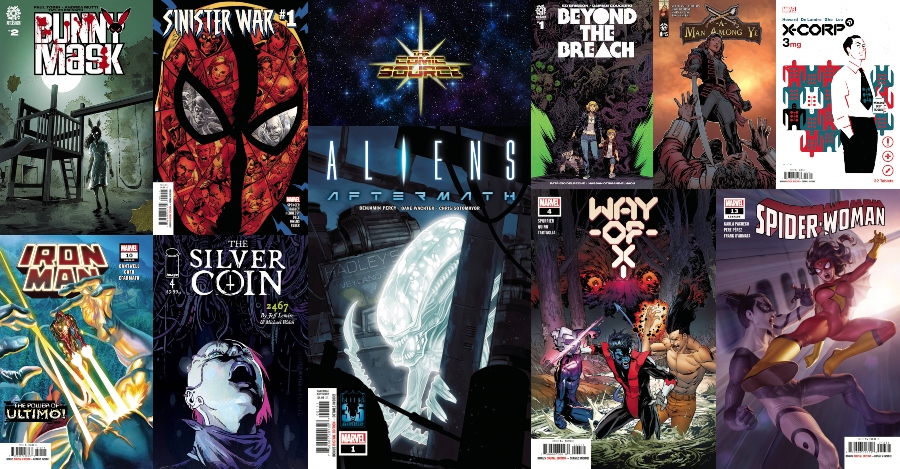 Jace and Jay talk spoiler-free about some of the comics hitting shops the week of July 14, 2021. Bunny Mask #2 is the first book Jay read and it gives us plenty of momentum for the story as Bunny Mask shows up to haunt some people form her past, but those people have no answers to what or who Bunny mask is. We the readers are in the dark as well, plenty of events and character interaction, but what does it all mean? I guess we need to stay with the series to find out. Beyond the Breach #1 similarly drops us right in the middle of he action as a young woman and boy are thrown into the middle of an apparent other-worldly invasion by monstrous bugs. Action-packed from start to finish, we definitely have more questions that answers so we will be back for #2 to learn more. Sinister War #1 is an over-sized start to the series and once again Spider-Man finds himself overwhelmed by the events and villains in his life. It seems like this series is a way for writer Nick Spencer to try and tie up as many threads from his long run on Amazing Spider-Man and we may be going even further back to pull at a long established thread. Is Marvel going to undo the controversial One More Day storyline? Iron Man #10 sees Tony Stark return in a big way as he is stranded on a far off alien world, but is this where he is meant to be? Can he abandoned his mission to stop Korvac? Maybe this world is perfectly suited to help his desire to get back to basics and remember who Tony stark truly is. Silver Coin is a futuristic story that establishes an intriguing world in very few pages. we continue to think these stories tie together in more ways then it first appears and we hope that mean we can revisit this particular world again. A Man Among Ye #5 is the return of female pirates Anne Bonny and Mary Read. We love the voice that writer Stephanie Phillips gives us as well as the interaction between all the strong female characters in this book. New artist Josh George is more than up to the task of giving us dynamic art also, great issue. Alien Aftermath is Marvel’s second title set in the franchise of the Xenomorphs and it ties in very closely with the events and characters of the Aliens movie. tons of cool action & a new version of the Xenomorph makes this issue a fun read. Spider-Woman #13 is a great example of the balance between humor and action that Karla Pacheco is pulling off in this title. Jessica Drew has never been in better hands. Way of X and X-Corp are both great this week as we get a couple of set up issues that have ending that lead us to believe we have big action coming in the August issues of both books.