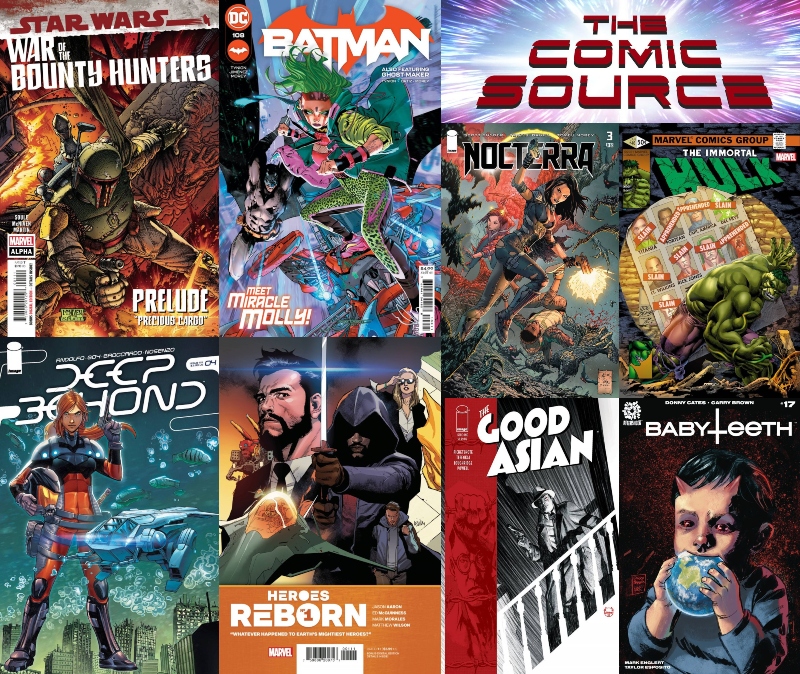 Jace and Jay talk about a few of the books hitting stands this week. Spoiler-free thoughts on this titles so you know what you might want to pick up when you hit your local comic shop. Star Wars War of the Bounty Hunters has all the classic feel of the first three movies. Boba Fett really shines and it is clear that this creative team loves Star Wars as much as us. Batman #108 gives us our first in-depth look at Miracle Molly, but it is a look Jay doesn’t really like as her costume just isn’t doing it for him. Deep Beyond gets Jace’s pick for Book of the Week as the story ratchets up with the introduction of a ton of new story elements that just dialed the narrative all the way up to eleven. Heroes Reborn while showing some potential feels a bit derivative and weirs, considering the way Marvel marketed this event, do they even care about it? Nocterra #3 is Jay’s Book of the Week with incredible color work by Tomeu Morey and so much emotion. Jay and Jace both comment on how much we have become invested in these characters already based on the emotional narrative the creators are giving us. The artwork is also second to none as both guys specifically call out the amazing color work by Tomeu Morey. The Good Asian #1 also is an emotional issue as we meet the protagonist for the first time who has a foot in two different worlds but seems to be accepted by neither. Baby Teeth by Dony cates returns without missing a bit as we get a big reveal at the end that feels like it may be leading to the climax of the series. Speaking of returns, a few issues ago Jace mentioned that after a couple slow months Immortal Hulk felt like it had returned to its glory days and was ramping up to something big! Well after reading the latest issue we have an idea of just what the big event might be. Can’t wait for the next issue. Also in this episode Jace gives a rundown on some other titles you might want to be on the lookout for at your comic shop this week.