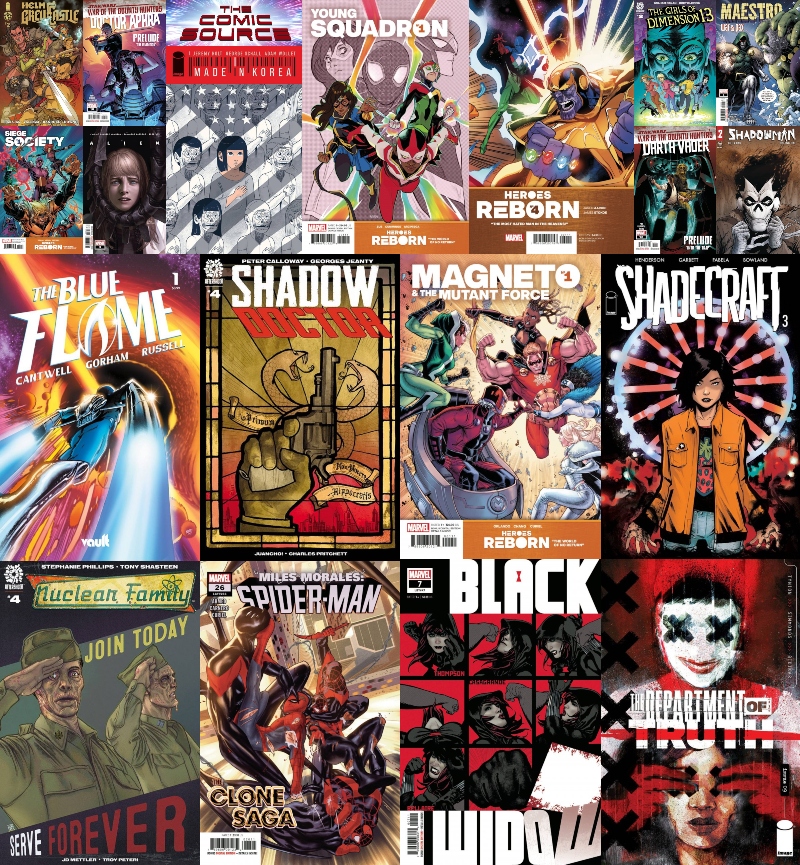 Jace talks about a ton of books he read for this week and gives his spoiler free thoughts. Blue Flame from Vault comics makes it’s long awaited debut and although some of the Sci-Fi idea have been seen before they are presented in a new, thoughtful and what we expect to be an emotional way. Great start to this series, very intriguing. Helm Greycastle continues the mash-up of high fantasy with ancient Aztec history, plus there are some RPG resources included so you can play your own Helm Greycastle campaign. Star Wars Doctor Aphra and Darth Vader both tie into the War of the Bounty Hunters event and provide some set-up and context for that story. Nuclear Family #4 gives us guessing in the best way about what might happen next. With only one issue to go, we still aren’t sure where the creative team is taking us and we love that! The Clone Sage gets started in earnest in Miles Morales, Spider-Man #26 and it feels like it will be much more intensely focused and faster paced than the original. Black Widow has become the best title Marvel is putting out, from the gorgeous art to the best most authentically depicted Natasha we have ever read, stunningly good. Department of Truth #9 gives us some insight into just how the Department manipulates and controls people’s beliefs and has Cole wonder if he should be involved with the DOT after all. The emotionality of Shadow Doctor continues and sets up what we expect will be a remarkable final issue. Shadecraft #3 has Zadie learning a lot of about how to use her powers and that some of the shadows she has encountered may not be what she thinks they are. These revelations could change everything she thought she knew. Shadowman #2 gives us a confidant hero who feels powerful in the hands of this creative team, curious to see how they will challenge him going forward, Alien #3 features the return of a fan favorite character from the Alien franchise and we can’t wait to see what happens next. The final issue of the Maestro War & Pax mini has the Maestro facing off against Doom and that fight is everything we expected it to be. Made in Korea is a fascinating look at a future world where humans are no longer able to conceive children, but there are other mysteries afoot that we haven’t gotten all the details for … yet. The Girls of Dimension 13 #2 is a fun magic-filled story and with the team about to be forced into using magical abilities they haven’t fully trained with, things could get messy in a hurry. All four of this weeks Heroes Reborn titles are solid and continue to show us familair characters in new was, as we have come to expect from this alternate reality tale. Jace also gives a rundown on some other titles you might want to be on the lookout for.