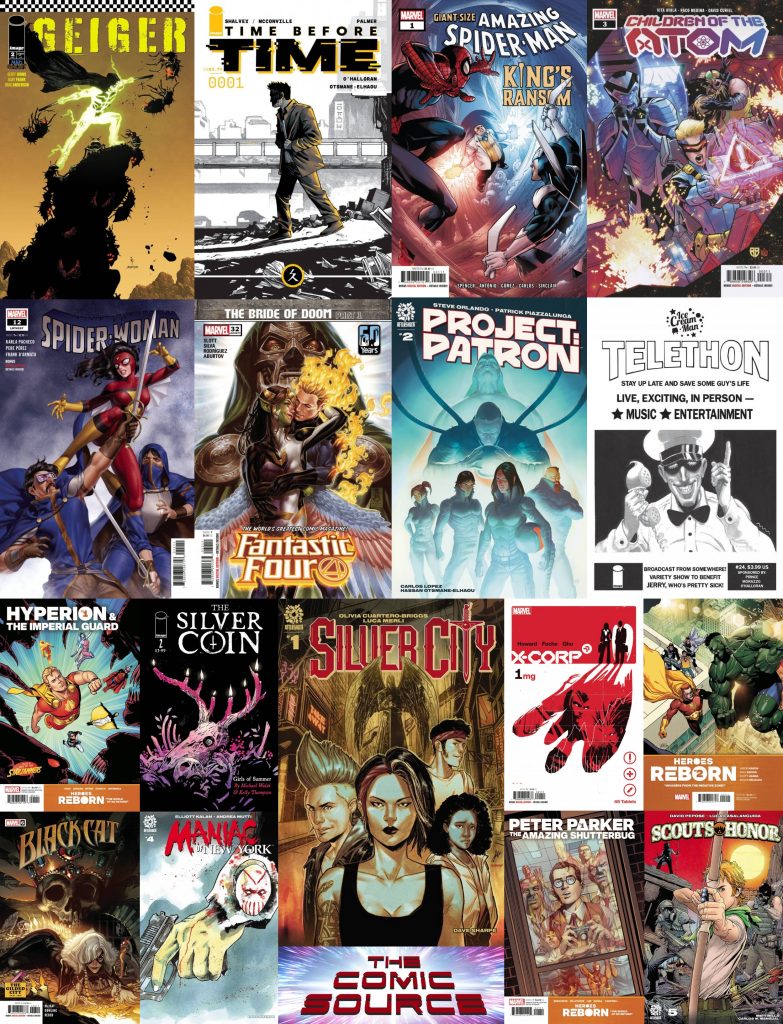 Jace and Jay talk about some of the books hitting comic shops the week of May 12, 2021. Black Cat continues the story of a deal Felicia Hardy wishes she hadn’t made. Maniac of New York is barreling toward the end of the story but whether or not our two protagonist can win the day may depend on the hint of an origin to Harry the Maniac we see in this issue. Heroes Reborn #2, Hyperion and the Imperial Guard #1 and Peter Parker Shutterbug #1 all start to flesh out the world Jason Aaron has built without the Avengers, we see some familiar faces, but without the Earth’s Mightiest Heroes, things just aren’t the same. Silver Coin #2 raises an interesting question about just what the coin does to the people who come to possess it, or is it the other way around? X-Corp #1 gives is a look at the cut-throat world of the boardroom in the Marvel universe as the mutants attempt to establish themselves as a corporate force promoting their pharmaceuticals. Spider-Woman #12 gives us plenty of action, but it is the surprising development in Jessica’s personal life that may be the most significant part of this issue. Speaking of personal lives, Dan Slott is building plenty of inter-personal drama amongst the Fantastic Four family and we have to wonder if the team will survive the fall-out when secrets are inevitably revealed. Project Patron adds a new wrinkle to the story we thought we were getting about the dynamics of the world’s most secret agency whose members are responsible for keeping the Patron active. Ice Cream Man #24 gives us a telethon wherein viewers are asked to pledge to save a man’s life, so why is no one pledging? You’ll have to read it to find out. Geiger #2 has a bit of a time jump from the end of #1, but it further fleshes out the world the creators are building as well as introducing some new characters we think will be pretty important moving forward. Time Before Time isn’t your typical time travel story as it is firmly established that time and events cannot be altered, so why bother to time travel at all? Well turns out it is a great way to escape from people looking for you, but that is just the start of the story. Children of the Atom #3 has some big events now that we have gotten to know the team, but will our young heroes be able to survive what’s coming with little experience in such monumental events? Giant Size Spider-Man King’s Ransom finishes off some long-running storylines that started all the way back in Amazing Spider-Man #1, but the consequences of the events of this issue haven’t even begun yet. Jay gives Scout’s Honor #5 his pick of Book of the Week as it comes to a satisfying conclusion, packed full of action & emotion just as this series has been from the start. Jace goes with Silver City #1 as his Book of the Week, not only for an intriguing narrative with many, many layers, but for the absolutely stunning art both in linework and color. Also Jace gives a rundown on some other titles you might want to be on the lookout for.

Children of the Atom #3

Hyperion and the Imperial Guard #1