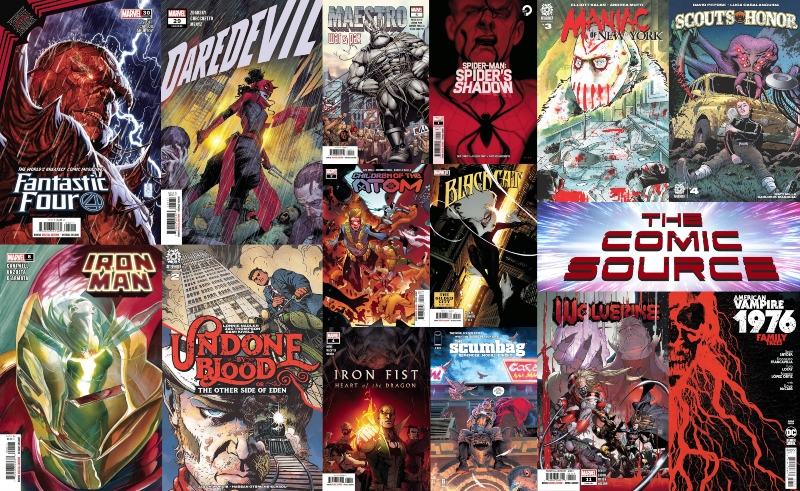 Jace and Jay take about a ton of books hitting comic shops this week. Black Cat from Marvel continues to bring Felicia Hardy back to her roots, likewise Iron Man is doing the same not only for Tony Stark, but also for Patsy Walker. Fantastic Four is a King in Black Tie-In, but it doesn’t seem like the creative team likes that fact, though they do seem to plant some seeds for some future family drama. Wolverine is an action paced issue continuing the vampire story running throughout the x-titles, plus … have you ever wondered what would happen if a mosquito bit Wolverine? Daredevil is another stellar issue as this creative team feels like they are building to something really big. Maestro War & Pax #4 is a bit predictable, but the action, although expected, still pays off. Meanwhile both Iron Fist & Children of the Atom show the heroism of their respective characters in different ways, but some upcoming revelations in both titles threaten to throw everything into chaos. Scumbag feels like it has lost its way in recent issues on this week’s issue is no exception, but the ending gives a glimmer of hope that the humorous debauchery may be about to return. The next to last issue of American Vampire ever, reminds us of the flexibility of the world Snyder and Albuquerque have built. Finally we have three excellent titles from AfterShock, Maniac of New York #3 has an incredibly impactful moment at the end but also has us wondering if our two female protagonists have what it takes to stop Harry. Undone By Blood #2 hasn’t quite pulled us in yet because we just don’t know Silvie well enough. Scout’s Honor #4 set up the final issue for what we expect will be more tightly paced all out action, just as this title has delivered with every issue so far. All this plus Jace gives a rundown on some other titles you may want to be on the lookout for.

Undone By Blood The Other Side of Eden #2

Darkhawk: Heart of the Hawk #1