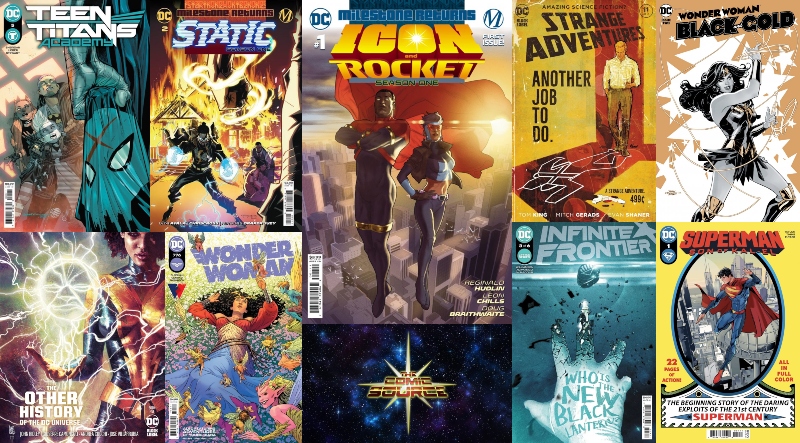 Jace and Rocky from Comic Boom! talk about 9 of the 18 titles DC is putting out for the week of July 27, 2021. That’s right 18 titles! So many books they had to break this week up into two episodes. This is part two, so if you want the whole week’s worth of books start with part 1!

Icon and Rocket Season One #1 – We get an updated origin for Icon and Rocket but they stay very faithful to the original iterations of the characters. If it ain’t broke, don’t fix it. Despite not changing anything dramatically the comic and characters still manages to feel very fresh with relevant ideas of the social issues Icon may have been fighting thirty years ago, which are sadly still relevant today.

Static Season One #2 – Pushed to his limit Virgil is forced to use his powers in front of his parents to prevent his house from burning down. Gravely concerned about the welfare of their son, a disagreement on how best to deal with the situation has Virgil striking out on his own, ditching school and taking matters into his own hands to try and control his powers. He reaches out to Curtis Metcalf, the hero known as Hardware for help, but ultimately that help may be more trouble than it’s worth.

Infinite Frontier #3 – All the plot thread from this epic, universe spanning story continue to move forward, but are they moving in the same direction? Rocky seems to think so but Jace has his doubts. It’s definitely time for this story to start to come together as one narrative to give readers some idea of where the DC Universe is heading, The individual storylines are effective so far though, as we can’t help but wonder what allows Roy Harper to wield a Black Lantern ring, we get a glimpse of where Darkseid has imprisoned Barry Allen while Alan Scott and Obsidian continue to look for Jade.

Teen Titans Academy #5 –  Have you ever wondered how the Bat Pack ended up at Teen Titans Academy? Well wonder no longer, we get the full story in their own words. In fact, we learnt hey are telling the story to Red X who in turn for this show of trust reveals his identity to the three young heroes although it remains a mystery to us. Whether or not the Bat Pack buys into what Red X is telling them about trusting the other adult heroes of the Academy remains to be seen.

Strange Adventures #11 – More revelations in this issue as we learn if Adam Strange was truly behind the deal that was made with the Pykkts that resulted in Aleea being imprisoned. The fall out for this may shatter the relationship of Adam and Alanna beyond repair, but was the price they paid worth it? When billions of lives are at stake does that outweigh the love of a parent? Big questions in this one leading to a big finale.

Wonder Woman #776 – Wonder Woman’s quest to find Janus and stop her murderous rampage across the realm of the gods continues in the fairie land of Elfhame. Enchanted, magical and mystical it is just one more adventure for Diana as she attempts to continue on her ultimate quest to return to our earth.

The Other History of the DC Universe #5 – The incredible series which started out with a spotlight on Jefferson Pierce comes full circle with the story of his eldest daughter Anissa Pierce. Equally, emotional, powerful and poignant, the story itself is a perfect encapsulation of Anissa herself. Despite her living herself striving to not become her father, without her even seeing it herself, the similarities are far too many to be merely coincidence. The “other history” of the DC Universe in many ways is the history of the Pierce family themselves.

Wonder Woman Black & Gold #2 – We get some very interesting tales of Diana from a very, very diverse cross section of creators. Many of the stories focus on Wonder Woman’s relationship to gods and that leaves Rocky wondering if gods are more important than mortals to Diana, It’s a valid questions and one that has a clear answer based on these stories.

Superman: Son of Kal-El – Jon Kent is on his own, but what does that truly mean? Who is he when he is not Superman’s son? Does he even have an identity and how can he figure out how to fill his father’s shoes when he doesn’t even know who he is as a person or a hero? There are more questions than answers for Jon in this one, but that still doesn’t excuse him asking Damian for advice!