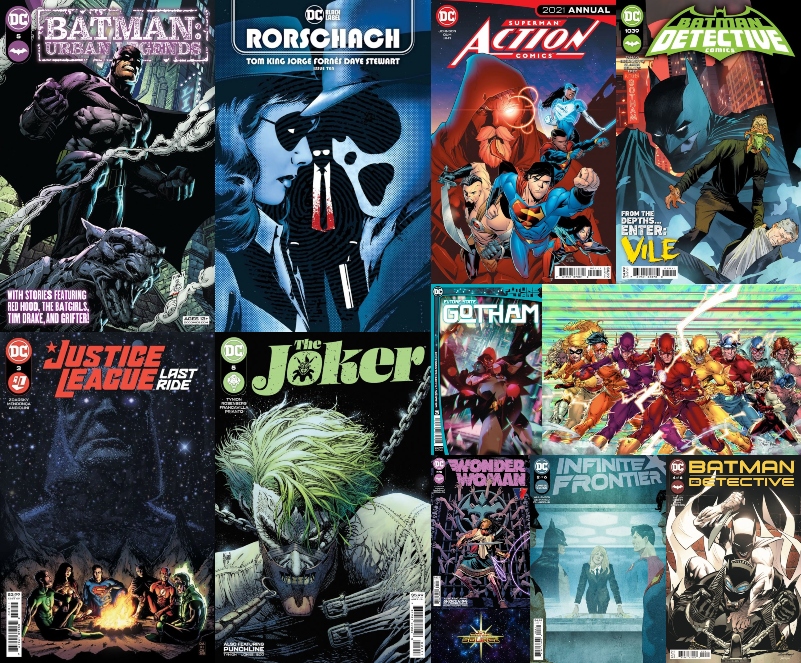 Jace and Rocky from Comic Boom! break down the DC books for the week of July 13, 2021. Batman Urban Legends starts off with arguably the most definitive Jason Todd story ever as we see the former Robin facing his inner-demons with gorgeous art from Eddy Barrows & Marcus To. The second story gives us our second look at Ryan Wilder in the DCU, but we haven’t seen her in the costume yet. The Tim Drake story sparks a HUGE debate between Jace and Rocky about the future of Tim and whether the characterization we get in the story is accurate or not. The final Batman Urban Legends story finishes up the Grifter story with kinetic Ryan Benjamin art and a massive reveal that could have lasting effects for the DC Universe. A lot of people are going to be talking about this Grifter story, so we hope it doesn’t get spoiled for you. Rorschach #10 lays out the case so far and adds some insights to let try to figure out the mystery for ourselves and the spectacular artwork really makes this one of the best issue so far. Justice League Last Ride #3 is another real highlight this week as Zdarsky gives us the awkwardness of a family dealing with loss in a pitch perfect way. Also the Miguel Mendonca art is perhaps the best single issue the artist has ever done, AMAZING! The latest issue of the Joker, #5 departs from the current storyline to give us a past story of the Joker and Gordon that adds a lot of context to their relationship. We also get some great Francesco Francavilla art that really adds to the moodiness of the story. Detective Comics #1039 shows us Hue Vile revealed and gives his origin as well, it feels a bit abrupt but maybe the next time we see Vile show up it may resolve his story and reflect back favorably on this one. Future State Gotham #3 is frustrating both from the sense the diminished quality of the art as well as the lack of momentum in the story which feels bogged down in tropes. Flash 2021 Annual #1 is yet another Wally West redemption story, the retcon that it applies to the Heroes in Crisis story sets off a volatile debate amongst the guys. One of them argues it is heartfelt while adding respect and weight to the death of Roy Harper. The other says that the way this story dismisses and diminishes Heroes in Crisis is blatantly disrespectful. Who do you think is on which side? And more importantly, who do you agree with? Wonder Woman #775 is another title the guys didn’t see eye to eye on, the heavy ties to different mythologies are starting to pull the attention away from Wonder Woman herself for Rocky, while Jace things that it has yet to be determined where the story is going or how to grade it. Infinite Frontier #2 has some great moments, but we are still waiting for that one story beat that can start to pull all this disparate threads together. We do have hope though, because the individual moments have been intriguing. In the pages of Batman The Detective #4 we see a Bruce Wayne who may have lost a step. or has he? The characterization is a little inconsistent for Jace and he wonders of the story might be suffering because of it. Jace and Rocky also express their shock and sorrow regarding the passing of Robson Rocha and pass their condolences on to his family and friends. A tremendously talented artist who was taken far too soon, the loss for the industry is a big one. This is our biggest spotlight yet and there is a TON of fiery debate about his week’s books.