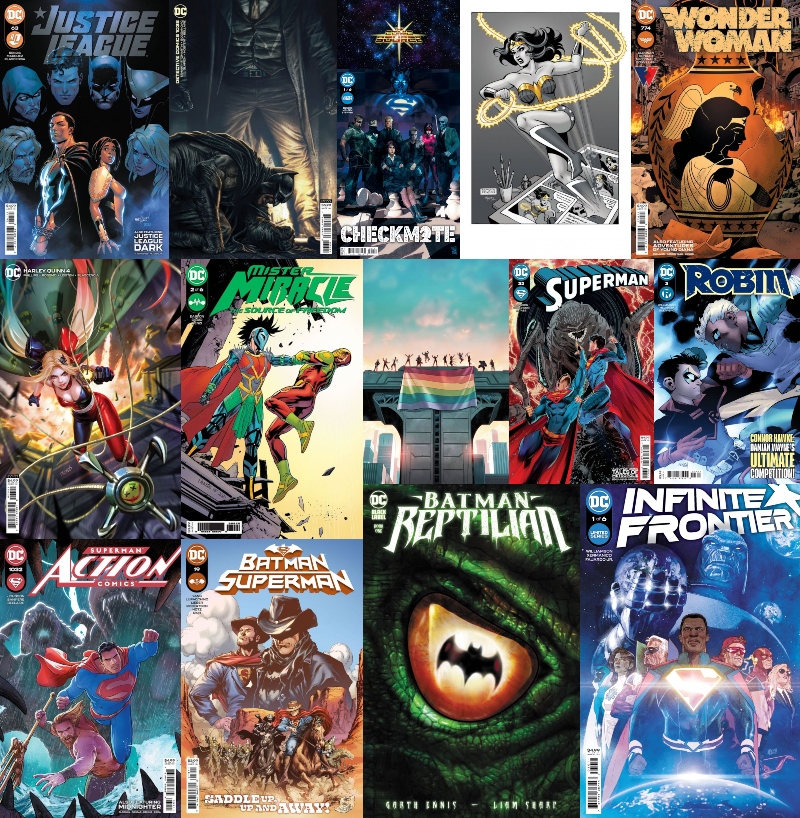 Jace and Rocky from Comic Boom! chat about the DC books for the week of June 22, 2021. In the pages of Justice League #63 Naomi officially joins the the league while in the back up Justice League Dark story, we meet a new potential female member of that team. Detective Comics #1038 has a big brawl between Batman & Roland Worth with what we expect is the Magistrate pulling the strings, while the back-up shows that the Penguin may want to return to some former glory. Checkmate #1 brings back all the familiar players from the previous Leviathan events, but can Mark Shaw truly maintain control of all the intelligence assets of the DC Universe? Wonder Woman Black & Gold #1 has some truly astounding art with some great stories that provide wonderful insight into who Diana is. We get more Wonder Woman in #774 as Diana finds the gods of Olympus have been killed, but she is not about to let them remain in the Graveyard of the Gods without trying to rescue them. Harley Quinn #4 shows Harley bouncing back from the events of #3 and choosing to bring the fight to Hugo Strange and rescue her new sidekick Kevin. Mister Miracle #2 continues this excellent series as Shilo Norman’s identity may be compromised and the fallout from that may be tremendous. How will he deal with this possible disaster while being attacked by N’ver Free, who claims to be the true child of Scott & Barda? Teen Titans Academy #4 is a Bat Pack investigation into the identity of Red X, but are the kids on the right track? Superman #32 finishes up the series as Superman and Jon are able to rescue the Thakkramites from the Shadowbreed. On the heels of that rescue it’s clear the Kal-El is very proud of his son. Robin #3 shows us the first interaction between Damian and Connor Hawke, but it is the surprise guest appearance at the end of the issue that may be even more important. Action Comics #1032 reveals that the suspected Kryptonians imprisoned on War World may be a group that fled Krypton thousands of years before the planet exploded. One thing is for sure, whether these prisoners are Kryptonian or not, Superman will not let them remain enslaved. Batman Superman #19 gives us some really fun version of Superman Batman and Robin in different time periods. Each of the era’s is illustrated by a different artist and it really helps to bring the comic to life. This comic is so much fun, we hate that it is ended with #22. Batman Reptilian has amazing art that brings to life this great version of Batman who has a little more of an edge than readers of the conventional version of the Caped Crusader may be used to.  Infinite Frontier #1 has some interesting threads but it isn’t 100% clear yet how things may all fit together, but the Psycho Pirate and last page reveal were favorite moments for the guys.