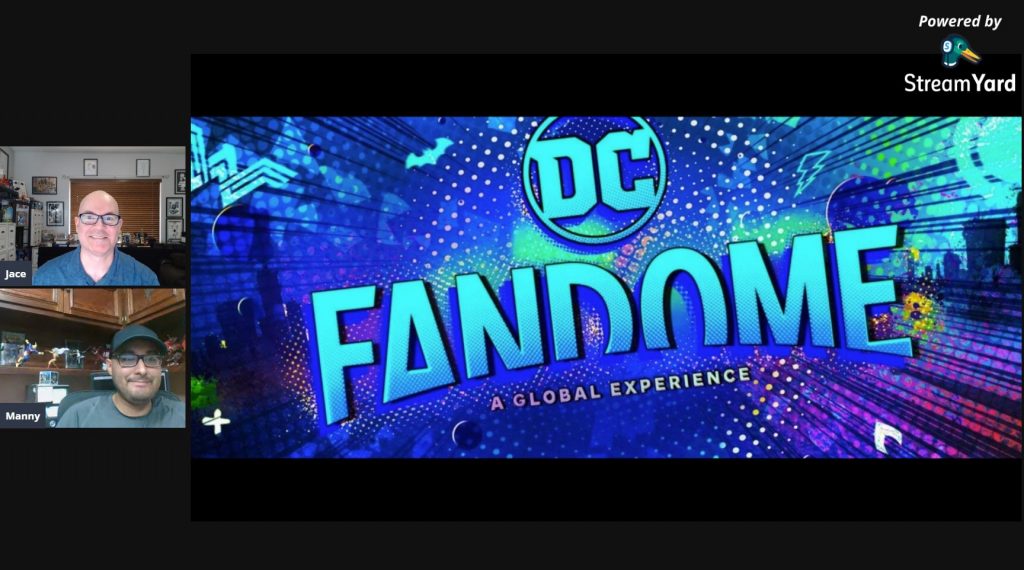 Jace and Manny go over all the panel for the DC Fandome happening on August 22, 2020.

Wonder Woman 1984 – Saturday, August 22 @ 1pm [Note: all times in ET] Wonder Woman 1984 stars Gal Gadot, Chris Pine, Kristen Wiig and Pedro Pascal, and director/co-writer/producer Patty Jenkins join forces with Brazilian hosts Érico Borgo and Aline Diniz to celebrate the fans in a big way. They will answer questions from fans from all over the world, talk fan art and cosplay, and reveal an all-new sneak peek at the upcoming film — plus a few more surprises! 25 min

Warner Bros. Games Montreal Announcement – 1:30pm
Gamers! You won’t want to miss this first look at an exciting new game, and Q&A with its developers. 20 min

The Sandman Universe: Enter the Dreaming – 1:45pm
Neil Gaiman, Dirk Maggs, G. Willow Wilson and Michael Sheen discuss the legacy of The Sandman comic book series and how it has been expanded with new stories, adapted into new mediums, and enthralled audiences around the world. 30 min

The Suicide Squad – 3:00pm
What else would you expect from The Suicide Squad but the ultimate elimination game? First up, writer/director James Gunn takes on fan questions, then brings out Task Force X for a fast-paced, no-holds-barred Squad Showdown that tests every team member’s Squad knowledge — and survival skills! 30 min

BAWSE Females of Color Within the DC Universe – 3:45pm
What’s a BAWSE? Find out here as some of the hottest actresses across DC television and film sit down with celebrity DJ D-Nice and Grammy-winning singer/actress Estelle to discuss how they use their confidence and vulnerability to navigate their careers in Hollywood. Panelists include Meagan Good (SHAZAM!), Javicia Leslie (Batwoman), Candice Patton (The Flash), Tala Ashe (DC’s Legends of Tomorrow), Nafessa Williams and Chantal Thuy (Black Lightning), and Anna Diop and Damaris Lewis (Titans). Catch the entire full-length conversation at McDuffie’s Dakota in the DC WatchVerse. 20 min

Legacy of the Bat – 4:15pm
Calling all Batman fans! Don’t miss this discussion on the wide scope of the Batman universe, including the Batman Family of characters. Key talent from comics, TV and games will provide insight into the world of Caped Crusader. 15 min

Chris Daughtry: Performance – 4:30pm
Grammy nominee/multiplatinum recording artist and huge DC superfan and comic artist Chris Daughtry delivers a solo acoustic performance of “Waiting for Superman,” a song inspired by the Man of Steel himself, that was the lead single from his band Daughtry’s 2013 album Baptized. His special DC FanDome performance will also feature an exclusive full-band performance of his brand-new song “World on Fire.” 10 min

The Joker: Put on a Happy Face – 4:45pm
Featuring interviews with filmmakers and industry legends, discover the origins and evolution of The Joker, and learn why the Clown Prince of Crime is universally hailed as the greatest comic book Super-Villain of all time. 5 min

I’m Batman: The Voices Behind the Cowl – 5:30pm
Everyone has their favorite Batman. But for audiences around the world, their favorite Batman has a local sound. It’s time to meet the voices behind the cowl. Hear what it’s like to be one of the many global vocal actors portraying the Dark Knight when the Super Dubbers, who lend their talents to the Caped Crusader on screens big and small all over the world, come together for the first time ever.
IN MULTIPLE LANGUAGES WITH ENGLISH SUBTITLES ONLY 20 min

The Snyder Cut of Justice League – 5:45pm
Zack Snyder fields questions from fans and a few surprise guests as he discusses his eagerly awaited upcoming cut of the 2017 feature film and the movement that made it happen. 25 min

Black Adam – 6:00pm
Star of the first-ever Black Adam feature film Dwayne Johnson sets the stage for the story and tone of the new movie with a fans-first Q&A…and a few surprises. 15 min

CNN Heroes: Real-Life Heroes in the Age of Coronavirus – 6:30pm
While DC features iconic fictional Super Heroes recognized around the world, CNN Heroes shines a light on real-life, everyday people making a difference in their communities. Now, as the global Covid-19 pandemic has turned all of our worlds upside down, CNN’s Anderson Cooper introduces you to the frontline workers, advocates, neighbors, and friendly strangers who are coming together to help us through this crisis. Learn more at CNNHeroes.com. 60 min

Aquaman – 7:00pm
Aquaman director James Wan and King Orm himself, Patrick Wilson, take a deep dive into the world of Atlantis that Wan created, revealing their favorite behind-the-scenes moments from the largest DC movie ever! 10 min

“Ask Harley Quinn” – 7:15pm
She has gone toe-to-toe with Batman and the Justice League, and taken down The Joker and the toughest villains of Gotham City, but at DC FanDome, Harley Quinn faces her toughest challenge yet — answering burning questions from DC’s biggest fans in her own tell it as it is, no-BS style. If you love the Harley Quinn animated series, this is one you cannot f—king miss! 10 min

Wonder Woman 80th Celebration – 7:15pm
As an Amazon and a god, Wonder Woman is truly timeless. So, it’s hard to believe she’s turning 80! Join Wonder Woman 1984 director Patty Jenkins and star Gal Gadot, along with a very special guest, as they reflect on the character’s influence on them personally, and look forward to the 2021 celebrations! 5 min

SHAZAM! – 7:30pm
Zac Levi and the cast can’t tell you s#&t! Sworn to secrecy on the new script for their upcoming movie, Zac and a few of his SHAZAM! castmates talk with the Philippines’ #1 DC fan, Gino Quillamor, about what the next movie might be about, while commenting on everything from panels to the other Zack’s cut — and even have a few surprise guests drop in! 10 min

The Batman – 8:30pm
The Batman filmmaker Matt Reeves joins host and self-professed fangirl Aisha Tyler for a discussion of the upcoming film…with a surprise (or two) for the fans! 30 mi